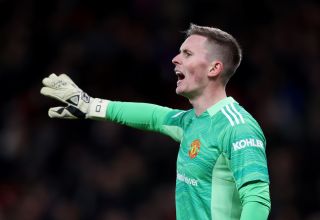 Dean Henderson has endured a tough second full season at Manchester United, despite ending the 2020/21 campaign as Ole Gunnar Solskjaer’s preferred goalkeeper in the Premier League.

The summer was tough on him, however. Henderson pulled out of England’s EURO 2020 squad due to injury and had his pre-season disrupted due to aftereffects of COVID-19.

Since then, he has struggled to make his way back into the side and David de Gea has done very little to warrant a place on the bench. The Spaniard is likely to win his fifth Player of the Year award at the end of the season.

Earlier this month, we revealed exclusively on Stretty News that Henderson would be looking to leave the club this summer after falling out of favour.

It now looks like clubs are queuing up for the goalkeeper’s signature, with several Premier League hopefuls looking to bring him in ahead of next season.

That’s according to The Sun, who say that Fulham, who are likely to get promoted sooner rather than later, are keen on adding him to the squad on loan.

Bournemouth are also interested, whilst Middlesbrough boss Chris Wilder is eyeing a reunion with Henderson if his side makes it to the Premier League. Newcastle are also cited as interested onlookers.

Furthermore, the report claims that none of the abovementioned clubs will be able to afford Henderson’s £120k/week wages if they do sign him on loan, which Man Utd are happy to share with his next club if an agreement is reached.

SN’s verdict…
It was all laid out for Henderson to replace De Gea as United’s number one when he returned to the club from his loan at Sheffield United but it hasn’t quite worked out. Questionable performances for both keepers made it hard for Solskjaer to choose between them and De Gea’s return to form has hardly aided Henderson’s cause.

De Gea has just one year remaining on his contract and Henderson could bide his time but he will feel that has already been done. The 25-year-old has also lost his place in the England squad, a spot he’ll be eager to regain.