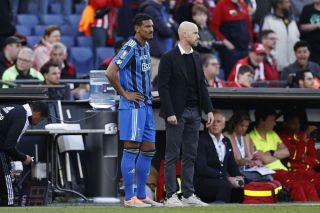 Manchester United’s manager-elect Erik ten Hag was on the losing side of the KNVB Cup final on Sunday as his Ajax side fell short against rivals PSV Eindhoven in a dramatic encounter.

Ten Hag’s side took the lead in the first half and had two goals ruled out for offside but they were not able to stop PSV’s fightback in the second half.

With the Amsterdam side leading at half-time, it only took five minutes after the interval for the home side to gain the advantage following two individual mistakes from the Ajax side.

Ajax could still end the season on a high note – they are top of the Eredivisie with roughly a month left of the season and could secure a third straight domestic title under Ten Hag.

The 52-year-old has been heavily linked with a move to Man Utd and news broke last week that a verbal agreement had been reached between the club and Ten Hag.

Any deal was, however, unlikely to be announced before this Sunday’s final, and with that out of the way, it’s now believed that an announcement could come sooner rather than later.

Prior to the game, Ajax chief Gerry Hamstra remained coy on Ten Hag’s potential exit, insisting that the Dutch club is still trying to convince him to stay.