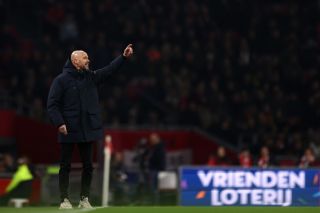 Manchester United are about to wrap up their season and their hunt for a new permanent manager also looked to be over, with reports earlier this week suggesting that a verbal agreement had been reached with Ajax coach Erik ten Hag.

The 52-year-old has one year remaining on his contract in Amsterdam and has been heavily linked with a move to Manchester United since Ole Gunnar Solskjaer was sacked last year.

Ahead of Sunday’s cup final against PSV Eindhoven, Ajax technical manager Gerry Hamstra confirmed that Ajax are still trying to convince Ten Hag to stay at the club.

“We hope he stays, but there are now only two scenarios. Our job is to stick to the facts and he’s not left yet,” Hamstra told ESPN, via The Metro.

“He is focused on the present. Only Erik can determine his future. He is old enough and wise enough for that. We really hope he stays, and if he does not stay we have to be ready for the second scenario.”

When pressed on why Ajax didn’t try harder to keep Ten Hag, Hamstra refuted the suggestion: “I can be very clear about this: we did. We did everything to… we are trying everything to keep him on board. We have tried everything. When? Recently. More money? Yes.”

SN’s verdict…
With nothing officially confirmed by either club, it’s hard to say anything else in front of a microphone. Hamstra was never going to confirm Ten Hag’s departure minutes before a crucial cup final.

United will, however, hope to wrap the deal up as soon as possible in order to plan for the summer. It’s set to be a busy summer at Old Trafford, with many outgoings as well as incomings expected.