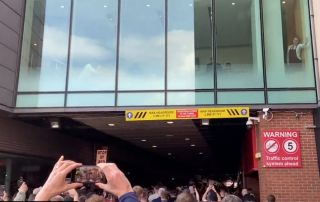 Manchester United fans are making their voices heard ahead of the Norwich City match at Old Trafford.

The protests started at the Tollgate, but the fans can now be seen outside Old Trafford.

Numbers are increasing as The 1958 urge fans to stay outside the ground for the first 17 minutes of today’s game, to mark a minute for each year the Glazers have owned Manchester United.

This comes after protesters gathered outside the club’s Carrington training ground on Friday morning.

MEN reporter Samuel Luckhurst has shared a video to Twitter of the protests prior to kick-off. The fans can be heard singing anti-Glazer chants.

Read more: Smoke and mirrors from the Glazers ahead of renewed Manchester United fan protests

One United fan told Manchester Evening News: “We are not going to move forward with the Glazers in charge of this football club. They’re just destroying the club.

“They’re telling Erik ten Hag that he’s going to have full control over the team. It’s just not going to happen.

“They’re going to sign bang average players and give them to the manager.”