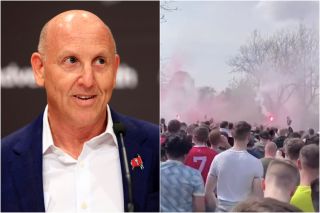 Manchester United are in action on Saturday evening as they aim to end their rotten run of form, which has seen them win just one of the last five in the Premier League.

The 1-0 defeat against Everton last weekend was a new low for Ralf Rangnick’s side, with the Merseyside club comfortably dismantling the Reds.

The aftermath of that result was as expected and a fan group planned a protest for today’s game against Norwich, which seems to have gained enough traction. Protestors against the club’s owners were also at United’s Carrington training ground on Friday.

Manchester United fans are protesting against the Glazer family's ownership of the club again 🔰 pic.twitter.com/2SUWkxNyaj

The latest defeat was another reminder of the club’s demise under the ownership of the Glazer family and Saturday’s protest is another positive step in the right direction.

A large group of United fans were seen marching and singing in unison against the Glazer family, as seen above. They should be waking up about now in Florida so hopefully, the message is delivered.