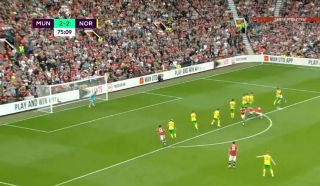 Cristiano Ronaldo is having quite the afternoon for Manchester United this evening – the 37-year-old scored twice in the first half against Norwich and has now completed his hat-trick.

The superstar striker opened the scoring early in the game before doubling United’s lead but a fightback from struggling Norwich ensured a nervy end to the game.

Rangnick’s decision to not play with a ball-winning midfielder seemed to have backfired but Ronaldo stepped up, as he usually does, to emphatically restore United’s lead with roughly 15 minutes to go, as seen below.

Ronaldo goal vs Norwich to secure the hat-trick (3-2) #mufc pic.twitter.com/P3A4N5oiue

RONALDO WITH THE BRILLIANT FREE KICK FOR HIS 50TH CLUB HAT TRICK!

The three-goal show was his third overall for United, his second this season and the 50th in his club career – quite the feat. United will hope that goal is enough to secure all three points, especially with Tottenham Hotspur losing earlier on Saturday.