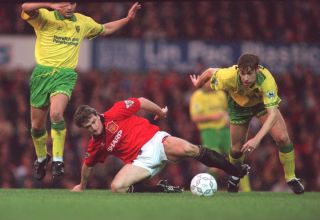 Manchester United welcome Norwich City to Old Trafford for a Saturday instalment of the Premier League. While these sides have not had a rivalry in recent years; there’s a historical factor that has provided more than a couple of talking points.

56,000 saw Tommy Doc’s United meet Norwich City in the old Division Two. While the game ended in a score draw, it was a testament to the undying support of the Old Trafford faithful. This support was well rewarded as a cavalier side gained immediate promotion.

In a season that saw Dave Sexton’s United push Bob Paisley’s Liverpool all the way, this was a memorable outing for a free-scoring United. 5 goals shared between Macari, Coppell, Moran and a brace from Jordan saw a rampant United continue their March toward a credible title challenge. Having suffered defeat at Maine Road two weeks earlier, this was the ultimate medicine.

Norwich arrived in Manchester as the Premier League leaders. After 19 matches played, Norwich had collected 39 points and sat 6 ahead of 3rd place United. The canaries had been grinding out results and had developed a reputation as a tough-to-beat title contender. Over 34,000 packed into Old Trafford to witness Mark Hughes seal a hugely important 1-0 victory. United would go on to win the league, with Norwich finishing 3rd.