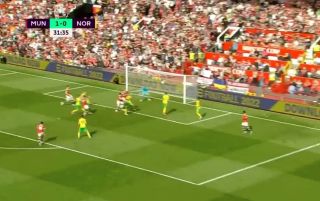 Cristiano Ronaldo is in the right mood at Old Trafford this evening.

The Portuguese star completed a brace with a brilliant header from a corner as 32 minutes struck on the clock.

Alex Telles took the corner and it invited Ronaldo to win the ball inside the box to score his 20th goal of the season.

United have not scored enough goals from corners this season, which is a surprise after adding Ronaldo to the squad last summer. He made no mistake this time around.

That leap from Ronaldo 🤩pic.twitter.com/gpxbC1LaX1

Ronaldo’s first goal was a tap in, assisted by Anthony Elanga.

With Liverpool away coming up on Tuesday night, United need three points today after Tottenham failed to make ground in the race for top four. We could have a chance.