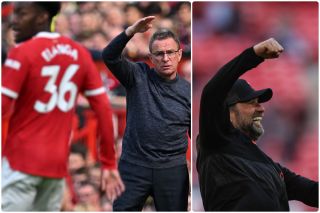 Ralf Rangnick has warned his Manchester United players that they must improve ahead of their trip to Anfield on Tuesday night.

Manchester United take on Liverpool in the league looking to put a dent in the Scousers’ aims to win the title. On top of that, the Red Devils find themselves in the hunt for the last Champions League spot.

The interim manager wants his players to look at their performance against Norwich City and improve before taking to the pitch on Tuesday night. It’s a big ask as Jurgen Klopp’s side are among the best in Europe at the moment, whereas we’ve just struggled to beat a bunch of relegation contenders – after losing to Everton a week ago.

Rangnick was speak to reporters after the match and some of his quotes were tweeted by BBC Sport reporter Simon Stone.

Ralf Rangnick on Tuesday's game against @LFC: "Everybody has seen today’s game and everybody knows what kind of team we are playing on Tuesday. If we play like we did today, it will be very difficult to even get a point."

“Everybody has seen today’s game and everybody knows what kind of team we are playing on Tuesday,” Rangnick said. “If we play like we did today, it will be very difficult to even get a point.”

It genuinely feels like I have heard someone say this before every single one of our big games this season, which proves that what I’ve been saying all along is right… Manchester United have just not got going this season.

I’m happy with the win over Norwich City – well, the three points — but we will get picked apart if we show up at Anfield and play anywhere near the same level of football. It needs to be much better but we are now relying on Juan Mata to come off the bench in games. When did that start happening again?