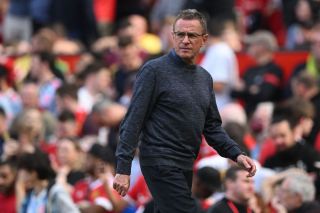 Manchester United could have revived their season following their dramatic 3-2 win over Norwich on Saturday, with top-four rivals Tottenham and Arsenal both losing on the same day.

The win leaves United just three points behind fourth-placed Tottenham and level on points with Arsenal, as Ralf Rangnick’s side prepares to face Liverpool next week.

Cristiano Ronaldo will be delighted to be back amongst a shout for this year’s golden boot, his three goals saved United once again, with the third goal being the pick of the bunch.

Rangnick reacted to his striker’s masterclass after the game, insisting it was vital to get a win as they scramble to rescue what’s left of this disappointing campaign.

“We should not only rely on him (Ronaldo),” Rangnick told BBC MOTD after the game. “We played well at times but we sometimes slowed the game down and didn’t make use of overlap situations on the wing. Defensively I was not happy at all.

“The results elsewhere were good. But it doesn’t make sense to look to other results. We need to raise our game. It’s about being clever and smart. All of a sudden it was 2-2 and David de Gea kept us in the game. But we definitely have to raise our play”

On a normal day, Ronaldo’s hat-trick would’ve stolen all the headlines but there was an incident between the supporters and Paul Pogba during but most notably after the game.

The 29-year-old was met with a hostile reception at Old Trafford on Saturday, with supporters booing him as he came off the pitch at full-time.

Rangnick admitted to understanding the fans’ frustrations but urged them to not target individuals: “I didn’t hear it myself but I was informed after the game,” he said.