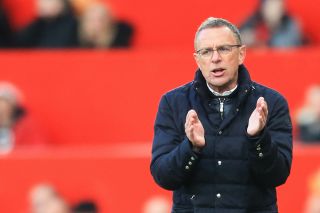 Manchester United are in action again and with Tottenham Hotspur slipping up earlier on Saturday, United have a golden opportunity to close the gap between themselves and Antonio Conte’s side.

Rangnick raised a few eyebrows with his team selection this afternoon after opting to play with no recognised defensive midfielder, with Nemanja Matic benched in the absence of Scott McTominay and Fred.

Instead, Jesse Lingard was given the nod to feature in United’s extremely attacking line-up. Rangnick spoke to in-house media ahead of the game to explain the decision, admitting that United’s failure to create chances in previous games inspired the call.

“Yes, as I said against Everton, and also against Leicester and Atletico, we didn’t create that many chances and today hopefully this will get better with this line-up,” Rangnick is quoted as saying by the official Manchester United website.

“We also need to be on the front foot against the ball and make sure that when Norwich have possession, we have all our players behind the ball.”

SN’s verdict…
United have been excruciatingly bad lately and clearly, it’s a structural issue. Personnel is also a problem but I wouldn’t say that’s Rangnick’s main worry. The decision to play with such a top-heavy side could backfire but if it means playing attacking football for the first time in months, most fans would take that risk.

Victory over Norwich would put United within three points of that final Champions League spot. With difficult fixtures left to play, three points is absolutely crucial against Dean Smith’s side.