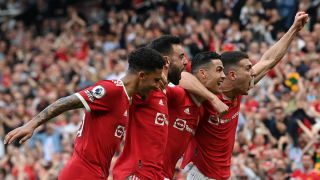 A big win for Manchester United which keeps us in the hunt for a place in the top four.

With Tottenham Hotspur and Arsenal both losing today, the Red Devils took advantage by beating Norwich City 3-2 at Old Trafford thanks to a Cristiano Ronaldo hat-trick.

The race for top four is now wide open but next up for United is a trip to Anfield.

While I would be pleased with a point against Liverpool, we really should be aiming to dent their Premier League chances with a shock win. I have seen stranger things happen in football.

Here’s how we rated each of the players on their performance against the Canaries.

My jaw dropped when he came off his line to stop Pukki in the opening minutes. It was a brilliant save, but not one you see him making very often because he tends to stick to his line.

Ineffective but made some key blocks in the second half.

Dragged out of position for Norwich City’s goal before the break.

Made an important interception in the first-half but played Pukki onside for a goal.

Took the corner for Ronaldo’s second goal but his defending, or lack of, costs us.

Plays like a lazy driver who wants to use cruise control 24/7. Booed by the Stretford End when he was substituted.

Took lots of risks. Nothing came off. Bruno was terrible again.

Rusty. Careless with his passing.

Another hat-trick to win us the game. The 60th of Ronaldo’s incredible career.

Cristiano Ronaldo has now scored 60 hat-tricks in his career, the most of any active player:

Got involved but not effective enough.

Did nothing to note.

Made a difference after coming on.