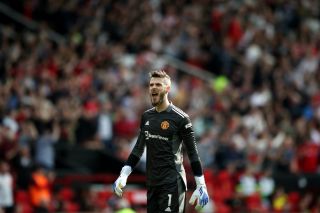 David de Gea stays Manchester United will fight for a top four finish until the end of the season.

The Spanish shot stopper rated 7/10 in our player ratings feature from Saturday’s 3-2 win over Norwich City.

De Gea made a number of important saves to help United secure three important points in the race for Champions League football.

He denied Pukki early on after rushing off his line and made another brilliant save to deny Milot Rashica at the end.

It was Cristiano Ronaldo’s hat-trick that really won us the match. He was at his clinical best today as Dean Smith’s side struggled to deal with him.

Both Arsenal and Tottenham Hotspur lost today, so United are still in the hunt to clinch fourth place, which is miles off what we expected this season.

Speaking after United’s hard-fought 3-2 win over relegation strugglers Norwich City, De Gea said: “Ronaldo has scored three very important goals for us. We know we are not playing well, but most important thing is three points.

“We should be controlling these games, especially against Norwich. We will fight (for top four) until the last season.”