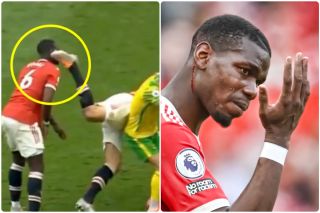 It wasn’t a good evening for Paul Pogba.

The midfielder cupped his ears to boos from Manchester United fans at full-time after being jeered as he was substituted in the second half.

Pogba didn’t perform well and looked happy to coast through the game. He’s rarely up for the fight, so it was worrying to see him given such a disciplined role in the middle of the pitch today, with Nemanja Matic named on the bench.

To make matters worse for Pogba, Harry Maguire managed to catch him in the head with his studs during the 3-2 win over Norwich City.

The skipper battled with Ben Gibson during a corner kick – but it was someone else who came out of it with a gash on their neck!

As Maguire hit the deck, his leg flung into the air and connected with Pogba. It was a complete accident but the Frenchman clearly didn’t appreciate it, with cameras capturing his reaction.

There's not just madness at Wembley this afternoon, Manchester United went from 2-0 up to 2-2 with Norwich and Harry Maguire has clipped Paul Pogba in the head 😬#MUNNOR pic.twitter.com/IvbrrAam8Z

Naaa the way Pogba was staring at Maguire got me 💀 pic.twitter.com/gFBVdenGge

Cristiano Ronaldo scored a hat-trick to give United the three points.