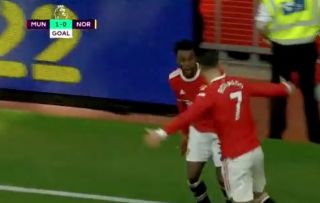 Manchester United are playing today but ahead of the game, the focus was mainly on the planned protest against the club’s owners.

It was the latest showing of discontent from United’s supporters, who are reminded of the Glazer family’s extremely negligent ownership on a weekly basis.

Nevertheless, there was a game scheduled and Ralf Rangnick named an extremely attacking side for the visit of Norwich, with Jesse Lingard welcomed back to the starting eleven.

Anthony Elanga was trusted ahead of Marcus Rashford and that paid off for Rangnick, with the young Swede’s pressure gifting United an early opener, as seen below.

Cristiano Ronaldo gets the Man United breakthrough after a horrendous error from Norwich 😳 pic.twitter.com/gdFbBwKAtu

The high press works to perfection for Manchester United, Elagna wins the ball and finds Ronaldo who gives United a 1-0 lead!

That’s Elanga’s first assist for Manchester United in the Premier League and it’s also an important goal for Ronaldo, who has dealt with heavy criticism following the game against Everton.

Rangnick will be hoping to build on that goal and win this game early.