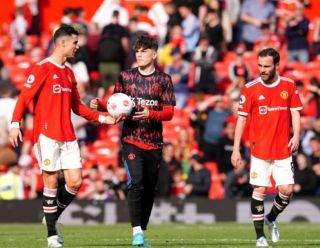 A 3-2 win at Old Trafford against a bunch of relegation strugglers did the trick. It wasn’t as easy as it should’ve been, but I don’t think our players to breeze past any teams at the moment.

A week ago, we lost 1-0 to Everton at Goodison Park. It only seems like a matter of time before we will be throwing away more points.

Ronaldo’s hat-trick won us the game – as did a few brilliant saves from David de Gea – but the Portuguese superstar did something at full-time which caught our attention.

CR7 was seen handing the matchball to team-mate Alejandro Garnacho on his first ever day in the matchday squad.

I highly doubt Ronaldo keeps all of his hat-trick balls but this was a lovely gesture nonetheless.

Although Garnacho didn’t get to make his Manchester United debut, he will be delighted with his new souvenir.