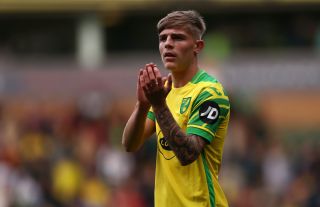 Manchester United loanee Brandon Williams will be supporting Norwich City this afternoon when his parent club host the Canaries.

The 21-year-old left-back has been on loan at Carrow Road this season and has played a lot of football.

However, due to the loan deal in place, Williams is ineligible to play at Old Trafford this weekend.

Prior to the match, the defender was keen to stress that there will be no split allegiances.

He told the official Manchester United website, as quoted by the Manchester Evening News: “When I got my injury a couple of weeks ago, I managed to go to Carrington because I had to do my scan there, so I caught up with a few people, but it will be nice to get back to Old Trafford again. Obviously, it will be a bit weird supporting another team, I’ve never done it before.

“I’ve watched every game that I can when I’ve not been playing and United are on. I’ll always support them – just not this weekend.”

Norwich City manager Dean Smith gave his Williams progress report ahead of the match, saying (via Norfolk Live): “I’d say he has improved and he is a very coachable player. And I think, like most of the loans that we have got here, the biggest compliment I can give them is that they feel like Norwich City footballers, and they have embraced being at Norwich City.

“I think that’s really important because you look at the size of the clubs that both Brandon [Williams] and Billy [Glimour] have come from, Mathias [Normann] has come from Russia, Ozan [Kabak] from Germany, but they’ve embraced being Norwich City footballers. I think that’s a big plus, not just for them but for our football club as well.

“But Brandon has improved a hell of a lot and, you only have to speak to him yourself, he needed probably this season to get away from Manchester United and play regular games.”

I had to laugh a little while reading Smith’s quotes on loanees embracing life at Norwich City, when they look crippled at the bottom of the Premier League. It’s still been a great year for Williams to gain top-flight experience but only time will tell if he is part of the new manager’s plans at Old Trafford.

Williams has been able to rack up 27 appearances for Norwich City so far this season, becoming a fan favourite during another difficult campaign at Carrow Road.

United have been in dire football but we really should be getting three points from this meeting.