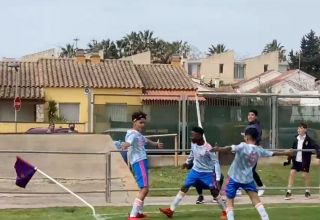 Cristiano Ronaldo Jr has scored another goal for Manchester United U12s – and of course he used the same ‘siu’ celebration as his dad!

The 11-year-old scored a goal earlier this week at The Mediterranean Internet Cup which is a tournament held in Spain for U12s teams, with Manchester United taking part this year.

Having already got on the scoresheet on Tuesday, Cristiano Jr was again amongst the goalscorers a day later, as seen in the video below:

Cristiano Ronaldo Jr. back at it again 💥

He took the ball just inside the penalty area before striking it home with his right foot.

The youngster ran towards the corner flag but attempting his dad’s trademark celebration.