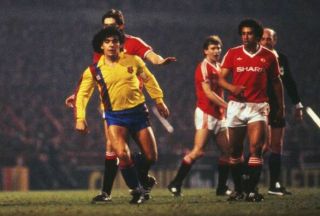 “I’ve played in World Cups and in cup finals but that night at Old Trafford it was electric. All those cliches such as the roof coming off, getting goosebumps on the back of your neck, like having an extra man, they were all true that night.”

In the history of United’s European adventures, there is often more promise than glory. For a club that pioneered a regressive English football’s advancement into European competition, the club has underachieved. Nevertheless, there is still a long book to be written of great European stories in United’s history. One of the greatest was on March 21st, 1984, the night Diego Maradona came to Manchester.

For you weans that aren’t aware, European Competition was an exotic and fiendishly difficult thing to qualify for once upon time. The European Cup/Champions League was the exclusive domain of league champions, the UEFA Cup/Europa League required a second or third place finish and the Cup Winners Cup, required you to win your primary domestic cup competition to qualify.

United had qualified for a highly competitive Cup Winners Cup (CWC) by beating Brighton & Hove Albion in a two-match epic FA Cup Final in 1983. It was a ferociously competitive line-up in the 1983/84 CWC tournament: The holders and best team in Scotland, Aberdeen; Rangers; Paris Saint-Germain, Porto, a Michel Platini lead Juventus and United’s quarter-final opponent, Barcelona.

United had a mountain to climb after the first leg at Camp Nou, going down to an unfortunate 2-0 defeat, which including an own goal from Graeme Hogg. But United had confidence that they could overturn the deficit. Left back Arthur Albiston described how United there wasn’t much between the teams:

“There really hadn’t been much between the two sides at the Camp Nou […] Barcelona got in front through an own goal by Graeme Hogg and we would have been happy enough with that result, but they scored again with an unstoppable shot [from Juan Carlos Rojo] right at the end.”

Nevertheless, this was a Barcelona side managed by the World Cup-winning maverick, Cesar Luis Menotti and containing the likes of Alexanco, Pichi Alonso, Bernd Schuster and Maradona.

But United had Captain Marvel, Bryan Robson, a one-man cavalry charge who could impossibly defy all opposition efforts, the laws of chance and probably the North face of The Eiger if you asked him.

Robson was magnificent. Taking on board manager Ron Atkinson’s orders to treat this as a one-off match, he snapped into them from the off, smoothed off by the polish of midfield partner Ray Wilkins, who booked the intensity by hitting gorgeous passes in his pipe and slippers, to regularly switch the play. The two formed a perfect partnership with Remi Moses bringing up the rear and the mercurial Arnold Muhren behind the front two of Frank Stapleton and wunderkind, Norman Whiteside.

“By kick-off the atmosphere inside Old Trafford was raucously passionate. The largely standing crowd ebbed and flowed and I felt like a piece of flotsam carried back and forth on the human tide.”

The energy and dynamism of the start whipped an already electric crowd into an escalating frenzy. United rattled Barcelona goalkeeper Urruticoechea with high ball early in, falling to Whiteside who hit the top of the bar. When Robson tapped Hogg’s header into the net, an unearthly roar ripped through Old Trafford.

By the time the second half got underway, Urruticoechea was in pieces. A succession of farcical decisions on his part allowed Robson to pounce on Wilkins’ rebound to make it 2-0. It was bedlam on the terraces.

Many will wonder whether this night is why Robson remained at Old Trafford. Going back through the coverage at the time, it seemed an inevitability was going to join the superstars of Serie A, even being given permission to speak to Juventus. Despite his love of a drink and propensity to injure himself with his style of play, Robson would have set alight any league he played in. Thankfully the move never came to pass, and this was the night he began to truly etch his legend.

Meanwhile the titular man of our story, Maradona, drifted through the match like dust in the wind. Not fully fit having recovered from a broken ankle received from a disgraceful tackle by Athletic Bilbao’s Andoni Goikoetxea the previous year. It summed up Maradona’s disappointing time at Barca, which would end that very summer when he left for Napoli, this was an ignominious end to his time in Catalunya.

The spiritual lack of Maradona left Schuster to try and seal the breaches in the Barcelona dam. Even his strutting, arrogant brilliance couldn’t surmount such a task.

Less than two minutes after Robson levelled the tie, he clipped a lovely pass out to Albiston marauding down the left flank. Albiston crossed into the Barcelona area where Whiteside who promptly nodded the ball down to an onrushing Stapleton at the opposite post who prodded home the winner to increase the tsunami of sound yet further.

When the final whistle blew, delirious fans invaded the pitch, engulfed the players, and carried Robson off the field like a victorious warrior king.

This was a case though, of peaking too soon that season. United were eliminated by the eventual winners Juventus in the next round and finished the season fourth in the league and trophy-less.

In many ways this story encapsulated United in the period since returning to the First Division under Tommy Docherty in 1975 to Sir Alex Ferguson’s arrival. Plenty of promise, brilliant but brief moments before the disappointment returns. Within two years of one of Old Trafford’s greatest nights, Atkinson would be sacked to make way for Ferguson, who would help deliver the Cup Winners Cup in 1991 and, in 1993, the League title that Robson the player, the captain and the warrior king, so richly deserved.