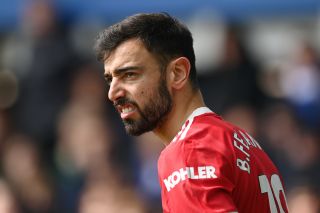 Although all of our focus is on the protest as of now, we must also take time to predict Ralf Rangnick’s team selection to face the Canaries.

The interim manager confirmed in his pre-match press conference that United have five players out injured for the match, so he certainly has a selection headache.

David de Gea will start between the posts.

We expect to see Diogo Dalot and Alex Telles operating in their preferred full-back roles, with Harry Maguire partnered by Victor Lindelof at centre-back.

United’s options in central midfield are limited since both Fred and Scott McTominay are ruled out with injury.

By default, Paul Pogba and Nemanja Matic will likely start – but some of the academy players could be looking for minutes from the bench at the very least.

Hannibal Mejbri has been training with the first team and I would be shocked if he doesn’t get any minutes under Ralf Rangnick in the remaining seven matches.

However, I suspect Bruno Fernandes will start behind Cristiano Ronaldo.

In the wide positions, Jadon Sancho and Marcus Rashford will be tasked with causing Norwich City problems at the back.

The Reds must take their chances this week!

Send us your scoreline predictions in the comments section below.