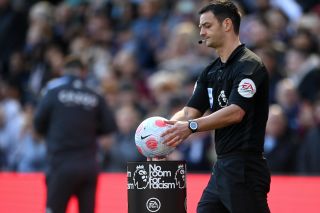 Everything you need to know about the referee and his fellow officials this weekend.

The Premier League has confirmed that Andy Madley will referee Saturday’s clash between Manchester United and Norwich City.

After a disappointing defeat to Everton last weekend, Ralf Rangnick will demand a response from his place against another relegation struggling outfit. We know that won’t be straightforward because United have been so underwhelming this season.

The Canaries go into the game on the back of their first league win since January. However, they brutally mocked United skipper Harry Maguire on social media ahead of the game, despite the fact they are seven points from safety.

No escape for Norwich.

Madley will take charge of his 14th Premier League match of the season as referee – but he has not done so in a United game since the Red Devils beat Watford in the Carabao Cup quarter-finals last term.

Simon Beck and Adrian Holmes will be his assistants at Old Trafford, while Mike Deane will be the video assistant referee.

The fourth official will be Jonathan Moss.