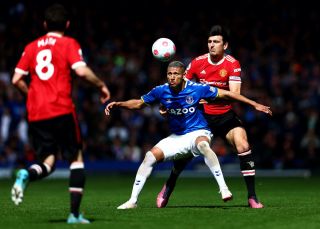 It’s always considered interesting when a footballer changes agent ahead of the transfer window. That is the case for one Premier League star who has been linked with a summer move to Manchester United.

Not long ago, Caught Offside revealed that Manchester United were admirers of Everton forward Richarlison as one of our potential targets up front.

There has been a lot written about Harry Kane and Darwin Nunez in the past week and that may see Richarlison go under the radar as a less exciting target.

According to Fabrizio Romano, the Brazilian has just signed up with a new agency (CAA Base), although they want to stress that he is totally focused on Everton for now. Sure!

Been told Manchester United have discussed Richarlison internally, alongside Darwin Núñez and other options.

Read more: Smoke and mirrors from the Glazers ahead of renewed Manchester United fan protests

That will be their line until the season ends and things could get ugly for Frank Lampard’s side as they sit just above the relegation zone. A surprisingly poor season for the Toffees hasn’t stopped Richarlison scoring goals, with the Brazil ace bagging seven times in 26 games this term.

I highly doubt Richarlison would switch agency if he didn’t have a summer transfer in mind.

The lure of a club such as United is tough to resist and Everton would net a decent transfer fee for one of their most prized assets.