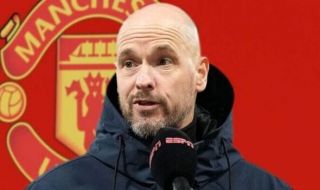 That’s according to Neil Custis of The Sun. He claims the soon-to-be manager of Manchester United “ripped” the club’s set-up apart in his job interview.

Both John Murtough and Darren Fletcher attended these meetings.

Already, it sounds like we’ve landed a manager with an edge, someone who knows what they need in order to achieve. The man has yet to arrive in Manchester and we are falling in love with him.

Moreover, one Old Trafford source told The Sun: “It was like United were being interviewed by Ten Hag rather than the other way round.”

I’m already impressed at the idea of Ten Hag laying bare exactly what he feels is wrong with United.

Everyone can see how far we’ve fallen since Sir Alex Ferguson’s retirement – going from being regulars in the Champions League to constantly dipping into the Europa League – and we hope it is the Dutchman who can change that.

On top of that, the club has spent around £1billion on new players in those nine years, yet the football is getting worse.

The report adds that United officials initially took a few days to digest what Ten Hag told them. They eventually came to the conclusion that they were impressed by his assessment, albeit brutally honest.