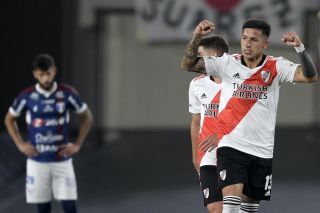 Manchester United are in the market for a new midfielder this summer and River Plate ace Enzo Fernandez has been linked with a move to Old Trafford by several outlets in the past week.

Fernandez, 21, insists he is not getting distracted by reports linking him with a switch to the Premier League giants.

There has been reported interested from Real Madrid too, but United sent scouts to watch him for a fourth time earlier this week after netting a goal for River Plate in their 2-0 win over Fortaleza in the Copa Libertadores.

The Argentine midfielder was asked about the transfer rumours following the match.

“Calmly, humbly, with a low profile. I try to work day by day to keep improving and growing,” said Fernandez, as quoted by TyC Sports.

“Luckily I’m finding regularity, continuity and my teammates and the coaching staff help me a lot. I handle it well. I’m grateful for the compliments, I read a lot of the messages they send and I’m happy. I will continue on this path.”

Fernandez could appeal to United because he had a reported £20m release clause in his contract. That is significantly less than the money West Ham would demand for Declan Rice, who is seen as another midfield target for the Red Devils this summer.

Let us know if you think United should take a gamble on Fernandez in the transfer market?