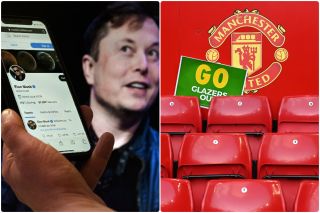 Elon Musk has offered to buy Twitter for $43 billion.

Musk, the world’s richest person, has plans to turn the social media network into a privately-owned company because he believes a takeover is needed to uphold free speech.

The eccentric billionaire – who is currently worth an estimated $273 billion, thanks to the value of Tesla, his publicly held electric car company – aims to turn Twitter into ‘an inclusive arena for free speech’.

That would see a change in how the present Twitter algorithm works.

However, there are a number of Manchester United fans who believe that Musk should abandon his pursuit of Twitter and buy the football club from the Glazer family instead.

It has been clear from day one that United fans never wanted the Glazers.

Here are some of the best tweets we stumbled across:

Elon, Elon. Retract ur offer. Buy Man United. Spend £2b on the best players in the world. Win everything. And then boast about it on Twitter.

@elonmusk could you have a serious look at @ManUtd. This club was and could be the greatest club in the world. Largest world fan base currently has the best player in the world @Cristiano. Unfortunately we have bad owners which silence the fans. A change of guard is needed! HELP

That could be one way to lessen the toxicity on social media. Think about it.