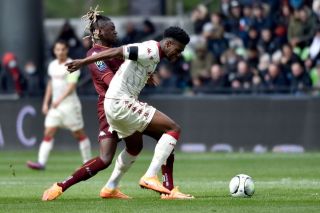 Erik ten Hag is believed to be in favour of signing AS Monaco midfielder Aurelien Tchouameni for Manchester United this summer.

The Dutchman is set to become the next manager at United after beating Paris Saint-Germain boss Mauricio Pochettino to the job.

After impressing with two domestic double triumphs at Ajax, and possibly a third this season, an agreement in principle has been made for Ten Hag to replace interim manager Ralf Rangnick at Old Trafford.

According to ESPN, Ten Hag is eager to overhaul United’s midfield and is keen on signing Monaco starlet Aurelien Tchouameni.

It is noted that Tchouameni, 22, is one of the targets Ten Hag will present to the club after enjoying a fine season in Ligue 1.

⭐ Aurelien Tchouameni has won the WhoScored Man of the Match award as many times as Leo Messi and Neymar combined (4) in Ligue 1 this season pic.twitter.com/jaycR7lxVj

Monaco are understood to be open to negotiations regarding a move probably because they know he will want to join a bigger club in the near future.

The French side are guaranteed a hefty profit on the young sensation they bought from Bordeaux in 2020, if they cash in this summer.

While Paris Saint-Germain are interested in signing Tchouameni, ESPN claims the player favours a move away from France.

He would be an exciting replacement for Paul Pogba, who is set to leave on a free this summer, after showing at Monaco how he can grab games by the scruff of the neck.