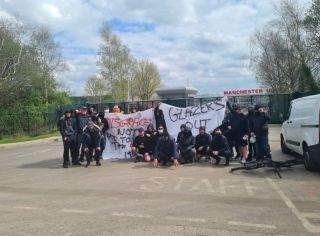 Manchester United felt the need to increase security at Carrington this morning as a number of fans protested peacefully at the training ground.

According to the Manchester Evening News, there were around two dozen anti-Glazer protesters at Carrington on Friday afternoon, ahead of planned protests this weekend before United’s league meeting with Norwich City.

Some fans were carrying a ‘Glazers Out’ banner, while another read ‘Disgrace not fit to wear the shirt 1958’.

Police were spotted in attendance – photo below courtesy of MEN reporter Samuel Luckhurst.

A United spokesperson said (via MEN): “There was a small and peaceful protest outside the Carrington training ground today. We respect the opinions of fans and remain committed to strengthening our engagement with them.”

Another smokescreen-esque statement with false promises.

The Glazers have used Manchester United as their commercial cash cow from the minute they got their hands on the club. They must think we are really gullible to fall for the latest announcement about Old Trafford’s potential redevelopment or even a shiny new manager.

Ralf Rangnick spoke to the media at his pre-match press conference after protesters gathered outside the training ground this afternoon.

When asked about the protests scheduled before kick-off, with The 1958 urging fans to not attend the game until 3.17pm (a minute for each year the Glazers have been proprietors), Rangnick said (via MEN):

“We all know that football is a game of passions and emotions and we can all understand. I can understand the supporters being disappointed about where we stand in the table and the performance against Everton. still believe our supporters are one of the best, if not the best in England, as long as they do the protest in a peaceful way and as long as they still support the team in the stadium. They have the right to express their opinion. Emotionally I can understand them being disappointed.”