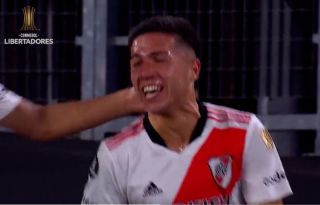 Manchester United scouts will like what they saw last night when Enzo Fernandez impressed for River Plate against Fortaleza in the group stage of the Libertadores.

TYC Sports reported that United had already watched the youngster on three occasions, making their fourth trip for last night’s game, which saw Fernandez score the opening goal after 10 minutes.

The ball comes to the edge of the box where Fernandez is waiting and he manages to beat the Fortaleza goalkeeper from distance.

Only time will tell if United’s interest is genuine, but Fernandez can’t do much more than stand out when United scouts are in attendance watching his every move.

It is believed that United could compete with Real Madrid for the Argentine midfielder this summer.

The 21-year-old’s release clause is currently €20m but that could soon rise to an additional €5m.

With Declan Rice likely to cost north of £100m, it makes sense that United would seek cheaper options in the transfer market.

Especially if our transfer kitty is cut after failing to qualify for the Champions League.