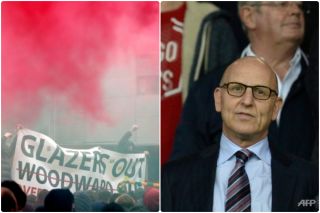 Amidst the general feelings of anger flowing through the veins of the fanbase towards the continual mismanagement of our once great club under the stewardship of the Glazer family, reference to the Liverpool protest has sprung to life the protest ideas once again.

A group named “The 1958” have taken on the task of stepping forward and trying to unite a very fractured fanbase, and have lay aim upon the upcoming Norwich City game at home for the beginning of their plans.

This was publicised during the last few days on social media, backed by MUST on Twitter and it hit the tabloids and broadsheets as well as online media outlets and Sky Sports, raising the profile substantially of this upcoming march/protest, legitimising it amongst the fanbase in a way by getting such coverage.

Share, retweet, let’s get the message to all Reds! 🇾🇪 pic.twitter.com/ZaYEMpjlFr

The laughable, vintage Glazernomics coincidences have begun already though, in what can only be seen as an amusing effort to quell the fire lit by The 1958 amongst a global gathering of Reds that want one thing: Glazers Out.

Firstly, the Erik ten Hag saga seemingly came to a head with the leaked news a day or so ago that it was now a verbal agreement, United had beaten off RB Leipzig to get their man, the man the fans want. United doing what we asked for, it would seem.

Today? Well, today we were told in a grand announcement directly from the club itself, that Old Trafford is to be vastly redeveloped, and modernised! Wow, amazing news! News with no mention of actual plans, no timeline give (hmm..) and nothing more than fluff and words to again, appear that they are doing their bit for us fans!

Unfortunately for Manchester United PLC, the fans are not quite as gullible as perhaps we once were, when being given promises and hypothesis from United, nowadays we have historical evidence to back up the cynical attitude that this is literally more PR attempts by the club to try and squash the protest.

It’s hoped that this time around, the protests will not be as easily brushed off by the club with flamboyant false promises that haven’t been kept, big name shiny signings and the likes.

The teams form, the players signed, the usual Glazer silencing tactics, cannot be allowed to win through.

We had them on the ropes after Liverpool, instead of going for the knockout we gave them back centre ring.

This time, I feel it may just be a little different.