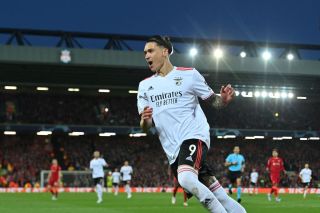 Manchester United need to sign a striker this summer and Darwin Nunez is quickly becoming one of Europe’s most wanted strikers.

Edinson Cavani is leaving at the end of the season and nobody knows what the future holds for Cristiano Ronaldo, with the Red Devils unlikely to be in the Champions League next season.

Although Erling Haaland is on the market, United are not believed to be in the race for the Norwegian, who is certain to be joining a club with ambitions to win the Champions League.

Another player who has recently emerged as a top talent is Benfica’s Darwin Nunez.

The Uruguayan scored against Liverpool last night, but one Premier League executive recently said that he could only see the 22-year-old leave Benfica for another Champions League outfit, which could come as a blow to United’s chances amid reported interest.

That won’t stop United considering a move for the player, though.

According to The Athletic, United’s recruitment team are expected to hold talks over Nunez.

This comes after suggestions Harry Kane would snub a transfer to Old Trafford after seeing Erik ten Hag beat Mauricio Pochettino in the race to become United manager.

The report adds: “Agents have been told that United are looking for a striker, two central midfielders and a right winger. Getting players to compete in all of those positions is unlikely, of course.”

A number of Premier League clubs have been linked with a move for Nunez this summer.