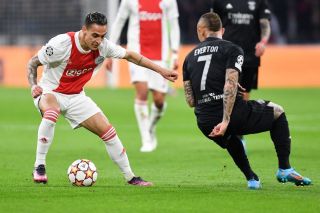 Manchester United have emerged as the ‘favourites’ to sign Ajax winger Antony this summer, according to a report.

Ajax boss Erik ten Hag is on the verge of becoming first team manager at United and he could look to bring a player or two with him from the Amsterdam club.

Antony, 22, has been one of the most effective forwards in Ten Hag’s Eredivisie winning side and they are looking to win the double again this season.

For instance, the Brazilian has contributed to 12 goals in 23 league appearances since the beginning of the campaign, and in the Champions League he had a role to play in an impressive 6 goals from 7 games.

It is noted that Ten Hag, who already has a verbal agreement to join the Red Devils, wishes to bring one of his Ajax stars with him.

Bayern Munich, Barcelona, Chelsea and Real Madrid are all said to be interested in the right winger, while Juventus are keen but appear to be losing ground in the race for his signature.

According to Tuttosport, as per Sport Witness, Ajax could demand up to €60-70m minimum for Antony’s signature when the transfer market opens.

United need to sign a right winger in the summer but it will be interesting to see if they will opt for a cheaper alternative because other areas of the team need to be straightened. I really don’t think 3 signings will be enough. It needs to be 5 at a minimum.