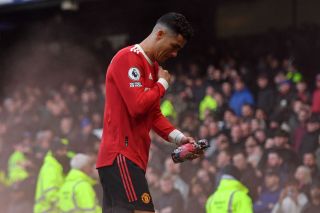 Manchester United are looking to rejuvenate the spine of their team, according to reports. The club is set to embark on a crucial transfer window, one they cannot afford to get wrong.

Erik ten Hag is expected to become the new manager of the club, with the 52-year-old set to be named the permanent successor to Ole Gunnar Solskjaer, who was sacked last year following a disastrous start to the season.

Ten Hag is likely to have the freedom of tailoring the squad to his liking but there are several question-marks over the squad, including the spine of the team.

According to the Daily Mail, rejuvenating that spine is on the agenda this summer as they attempt to halt United’s free-fall, with Champions League revenue looking increasingly unlikely.

As per the report, United want to strengthen the spine of their team, including a centre-back, central midfielder, and a striker.

Edinson Cavani will leave the club on a free transfer and Anthony Martial could also depart. There is also uncertainty over Cristiano Ronaldo’s future. Benfica striker Darwin Nunez and Tottenham’s Harry Kane are named as potential targets this summer.

Further down the pitch, there are a host of players named as reinforcements adjudged to be an improvement by United, with West Ham’s Declan Rice being one of them. Kalvin Phillips, Yves Bissouma, Sergej Milinkovic-Savic, Ruben Neves, and Aurelien Tchouameni are also named.

In defence, it’s claimed that United have discussed Antonio Rudiger, who is available on a free transfer from Chelsea. Ajax defender Jurrien Timber has also been a topic of discussion.

SN’s verdict…
Until the appointment of Ten Hag is formally agreed, it’s unlikely that we’ll know too much about United’s transfer plans. The Dutchman would need to assess the current squad before doubling down on his priorities.

But one thing’s for sure, a major clear-out is needed and departures are necessary to make up for the lack of Champions League revenue.

Some of the targets named in the mentioned report are being tracked by several elite clubs in Europe and United wouldn’t be unrivaled in their pursuits.