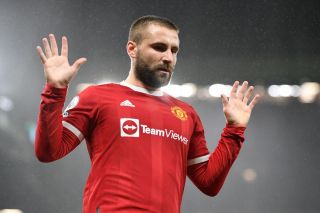 Luke Shaw could miss the rest of the season after undergoing surgery to remove screws from his leg following his leg break against PSV Eindhoven in 2015.

The 26-year-old missed last weekend’s 1-0 defeat to Everton due to the issue, with Ralf Rangnick confirming the left-back would be out for three weeks. Now, there are more worrying reports for the Englishman.

According to The Telegraph, Shaw is now facing a battle to play again this season after it emerged that the operation to remove the metal screws could take longer to heal.

The screws were inserted after his double-fracture seven years ago but as per the report, they have been a cause for discomfort this season.

The latest setback is the newest injury worry for Shaw this season, with the former Southampton man having missed games with hamstring issues and two different concussions.

SN’s verdict…
It’s been a disappointing season for Shaw but his absence will come as a huge blow to Rangnick, who is now left with just Alex Telles as the club’s only recognised left-back.

Telles was a bright spark in Rangnick’s opening weeks but his form has declined and Diogo Dalot, who is capable there, is preferred on the other side of the pitch.

With roughly a month left of the season, United will be desperate to qualify for European competition, with complete failure to take part in any of the three tournaments next season potentially harming their spending power this summer.