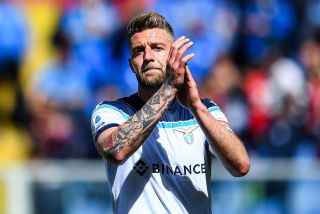 Sergej Milinkovic-Savic is a name that has stuck to Manchester United transfer speculation for years.

The Serbian midfielder was supposedly the solution if Paul Pogba left the club during Jose Mourinho’s reign, but that didn’t happen and the manager got axed instead.

Now, there are more suggestions that the 27-year-old could replace Pogba at Old Trafford, although it just sounds like the Italian press are reciting stories from years ago.

As reported by Radiosei (via La Lazio Siamo Noi H/t The Laziali), Milenkovic-Savic could make a decision on his future in the next 30 days. The report also lists United and Paris Saint-Germain as being interested in a move, but these claims are not being backed up in England or France.

The Red Devils need to focus on finding a defensive midfielder in the summer. Someone who can play every week, unlike Nemanja Matic, who has been past it for at least three years.

Apparently, Lazio manager Maurizio Sarri wants to sell Milinkovic-Savic in order to fund the squad’s overhaul, so the Serie A outfit could be just trying to find the biggest bidder ahead of the summer transfer window.

We don’t think this story is worth believing!