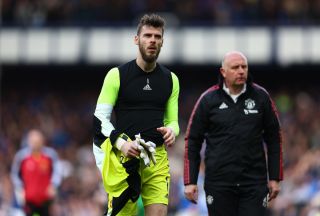 Manchester United are set for one of their busiest summers in modern history, with a new manager set to oversee a huge clearout in a bid to fix an underperforming group of players.

Erik ten Hag is expected to be named the permanent successor to Ole Gunnar Solskjaer, with the Dutchman set to take charge at the end of this season.

There are uncertainties over a number of players at the club, with several already looking to leave or are set to depart upon the expiry of their contracts.

Furthermore, there are a number of underperforming stars who could be sold in order to fund incomings. Earlier on Thursday, it was revealed that failure to qualify for next season’s Champions League could heavily impact United’s spending power, bringing their summer budget down to as low as £20m.

One player seems to be safe, however, and that’s David de Gea. That’s what former United midfielder Luke Chadwick thinks, at least.

The Spaniard has been a colossal between the posts for United this season, winding the clock back to his imperious five-year spell as the best goalkeeper in the world.

“Obviously different managers have different ways of playing. I would say David de Gea is competent with the ball at his feet, he’s got a nice ball-striking technique. United don’t really play out from the back at the moment, unlike Liverpool and City. I think De Gea could adapt to that style if he had to,” Chadwick told CaughtOffside.

“Overall I’d say De Gea’s been United’s player of the season again this year. He’s won that award so many times and I think he’s in line to win it again, so I can’t see the new manager making a new goalkeeper a priority, but it depends on how he wants to play.

“If he wants a goalkeeper who takes the occasional chance and plays out from the back, then maybe he’ll have someone in mind who he wants to bring in.

“But in my opinion, De Gea’s been exceptional and I think there’ll be a change in a number of other areas of this squad. It could mean some tough decisions with players who’ve been at this club for a long time, but I don’t see De Gea being a part of that.”

SN’s verdict…
De Gea has undeniably been United’s best player this season and although there are still concerns over some of the aspects of his game, his stock has risen this campaign – especially following the disastrous end to last season.

Ten Hag has a huge job on his hands and with funds already limited, it would be wise to concentrate elswhere. A goalkeeper is the least of his worries.

De Gea has just one year remaining on his contract at Old Trafford and a departure is highly unlikely. An exit next year, on a free transfer, seems more plausible.