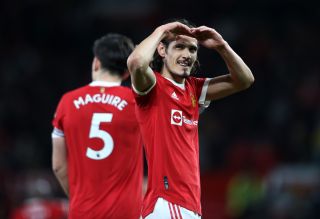 Manchester United are quite the hub for news right now and whether it’s on the managerial front, on the pitch, or on transfers – there’s never a quiet day as we approach the end of the season.

The transfer window opens on June 10th and it’s going to be a busy one for Manchester United, with several incomings as well as outgoings expected.

Erik ten Hag is expected to be named the permanent successor to Ole Gunnar Solskjaer, with the Dutchman set to take over at the end of the season.

The 52-year-old will need to assess his squad before any drastic measures are taken but a handful of stars are already to gearing up to depart on free transfers upon the expiry of their deals.

Journalist and transfers specialist Fabrizio Romano has now given an update on two of those players. Edinson Cavani enjoyed a magical first season at the club, capturing the affection of Old Trafford. It hasn’t quite gone as planned for his second bite of the apple.

According to Romano, Ten Hag’s imminent arrival hasn’t changed much on that front, with the Uruguayan still expected to leave for nothing, with a move to La Liga a possibility.

Jesse Lingard is also out of contract in the summer and after impressing for West Ham last season, there was a feeling that he could, after all, resurrect his Old Trafford career. It wasn’t to be, however, and he’s been left to play a bit-part role for the entirety of the campaign.

As per the report, Lingard is ‘exploring’ and considering his options as a free agent. An exit for Lingard would mean the end of a 21-year-long stint at United.

SN’s verdict…
Although Ten Hag may want to keep these players at the club, the damage has already been done with some of them. Cavani and Lingard certainly fall into that category.

Cavani is injury prone and his availability is at an all-time low, he’s not someone a new manager can put his faith in. Lingard is 29 and can’t risk being on the bench for another season. His stellar half-season with West Ham proves his quality as a Premier League player.

It remains to be seen how quickly these issues are resolved, however. It’s likely that departures will be confirmed before any big incomings.