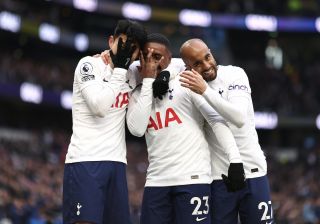 The Dutch winger has not got the game time he would’ve wanted when he joined Tottenham in 2019, especially with Dejan Kulusevski quickly settling after joining from Juventus on loan in January, but a switch to Old Trafford could now be on the cards for the Netherlands international.

He started his career in the Ajax academy but left for PSV, where he won three Eredivisie titles before earning a move to the Premier League.

According to the Daily Mail, Ten Hag will try to sign Bergwijn after failing to bring him to Ajax.

The same report claims that he would only cost £20m which could make for a very shrewd investment.

United will need to replace several squad members in the summer with Jesse Lingard, Juan Mata and Edinson Cavani all out of contract in the summer.

As things stand, Ralf Rangnick doesn’t have a lot of depth to work with and Ten Hag will want to try address that in the transfer market.

Do you think Bergwijn would be a good signing for Ten Hag this summer?