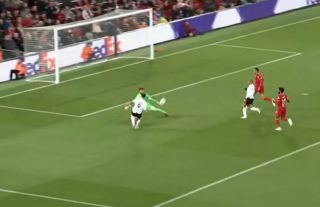 Liverpool become the first English club after United to reach the semi-final of the Champions League for a record 12th time, after beating Portuguese champions Benfica 6-4 on aggregate.

Jurgen Klopp’s side drew 3-3 on the night but Manchester United transfer target Darwin Nunez, who will apparently only leave Benfica for a club in the Champions League, got on the scoresheet at Anfield.

The Scousers will say Nunez was lucky because Joao Mario clearly ran into an offside position prior to his assist, although VAR didn’t think so after a check.

Darwin Núñez scores another goal in the Champions League! 🔥

The young star continues to shine against Europe's elite clubs…

What a star 💫 #UCL pic.twitter.com/hzEZAwjoI8

That was Nunez’s 32nd goal of the season and he was linked to United again tonight in a new report from Chris Wheeler of the Daily Mail.

There may question marks over whether the goal should stand, but there’s no doubting the class Nunez shows the find the bottom corner.

Sadly, the Uruguayan striker and his Benfica team-mates couldn’t do enough to muscle Liverpool out of Europe. Hopefully Villarreal can.

Let us know in the comments if you think United should sign Harry Kane or Nunez in the summer?