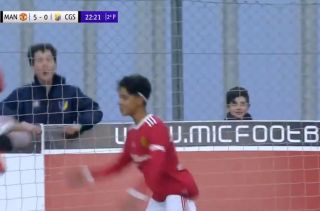 Cristiano Ronaldo’s eldest son, Cristiano Jr, is having an impact for Manchester United at youth level.

The youngster joined United’s youth ranks after training with the club following his father’s emotional return to Old Trafford last summer. He was previously on Juventus’ books and the video below shows that he has an eye for goal.

United’s U12s are currently take part in The MIC – which is an international tournament created with the aim of bringing together young players around a common passion: football.

Cristiano Jr was in the right place at the right time to find the back of the net as United went 5-0 up against EF Girones Sabat.

Of course he pulled out his dad's iconic celebration 🔥 pic.twitter.com/YxfPZtc9Vb

To celebrate the goal, he pulled out his dad’s iconic celebration.

We can only hope that his father starts scoring for the first team again soon!