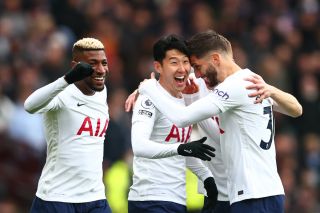 Tottenham Hotspur have emerged as favourites to finish in the top four after a couple of surprising results at the weekend, but the race for Champions League qualification is more complicated than usual as several teams have games in hand.

The two sides involved in the title race — Manchester City and Liverpool — are nailed-on to finish in the top four this season and I highly doubt anyone will be taking third place from Chelsea, who hold a five-point advantage over Tottenham (plus a game in hand).

However, if Arsenal win their game in hand (vs Chelsea), they can go level on points with fourth-placed Tottenham.

Sadly, for Manchester United, defeat away to relegation strugglers Everton last time out has left our hopes hanging by a thread. We currently sit in seventh spot with a game in hand over West Ham, but we’re six points adrift of Tottenham in the last Champions League place.

See the full list of odds below – to finish in the Premier League top four: