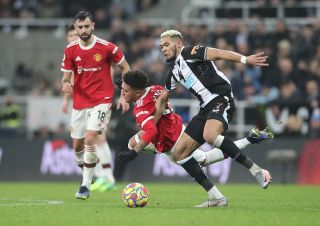 Manchester United are set to embark on one of the most defining summers in their modern history, with a new manager to be in place for the first time since Solskjaer stumbled across the job in 2019.

United’s disastrous season has culminated in a soul-crushing end to the campaign but with reports of a new manager walking through the door imminently, focus can finally be turned towards another rebuild but most importantly, a new era.

United have lagged behind Europe’s elite clubs for a number of years now and must close the gap to avoid being left behind further and super-agent Jon Smith, most famous for his involvement in forming the Premier League, has now likened United’s rebuilding to Newcastle United.

“When it comes to the Red Devils’ problems, both on and off the field – obviously they’re on the lookout for a new manager at the moment and everyone seems to be talking about Erik ten Hag, but I don’t think it is nailed on yet,” Smith wrote in his CaughtOffside column.

“Whoever comes in, they’ve probably got to strip it. This is a three or four year build-back. This is Newcastle United in a different shape or form.

“It is unfortunate but that is the way it is. There are certain players who aren’t good enough, not Cristiano Ronaldo by the way – I think Ronaldo is a born winner and has been absolutely phenomenal for them. But it’s a total rebuild – they’re Newcastle United in a different overcoat.”

SN’s verdict…
Undoubtedly, there’s quite a lot of work ahead for Manchester United if they wish to return to the glory days of the past. It’s not going to be an overnight success in any case.

The difference in these two cases is that Newcastle have gotten rid of their toxic owner whilst Manchester United are stuck with theirs. There is a possibility of success under the Glazer family but an extended stay at the top is highly unlikely when the club is being held for ransom by its owners.