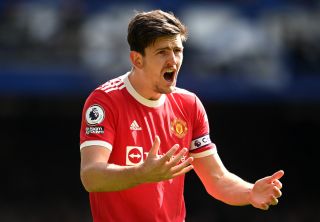 Harry Maguire’s form at Manchester United has been under the microscope for quite some time now and the disastrous 2021/22 season has been epitomised by his drop in quality.

The 29-year-old enjoyed a stellar campaign last year and was one of England’s best players in their run to the EURO 2020 final. He has, however, not been able to build on that this season.

Former Reds defender Rio Ferdinand has commented on Maguire’s form, insisting United’s form hasn’t suited him since he compelted his big-money move from Leicester in 2019.

Ferdinand also compared Maguire’s situation to Gerard Pique’s many years ago. The Barcelona legend spent four years at Old Trafford before returning home to Spain in 2008.

“In an England shirt he’s been nothing but phenomenal. He’s been unreal. You can’t say he’s a dead player, he’s been unbelievable for England,” Ferdinand said on his Vibe with FIVE show, via the Daily Mail.

“What I’m saying is, for England he’s been great, but they play a particular way of football that probably suits him.

“Gerard Pique was at Man United, you could argue that he might not have had the career that he’s had at Barcelona if he stayed at Man United because of the way he plays.

“It’s like boxing, styles make fights – it’s the same in football. The way of Man United’s football, and the way that they are trying to play, hasn’t suited him.

“But also form and confidence. His confidence has taken a big knock and I don’t care who you are, you could be Messi, Ronaldo, Zidane, Mbappe all these players – if their confidence is low they are not the same player.”

SN’s verdict…
It’s difficult to pinpoint exactly why Maguire’s form took such a dramatic turn for the worse. He was astute across the summer, colossal in England’s bid for their first bit of silverware in over 50 years.

That also came after recovering from ankle ligament damage, by any means not an easy injury to get over. It must also be said that Maguire’s form has coincided with United’s worst season since Sir Alex Ferguson retired in 2013, so it’s not all on him.

Maguire has proven that he’s good enough before and that doesn’t just vanish, there’s obviously some underlying issue. But whether it’s gone too far now is a question for another day and another man. That man could be Erik ten Hag, with the Dutchman expected to take over this summer.