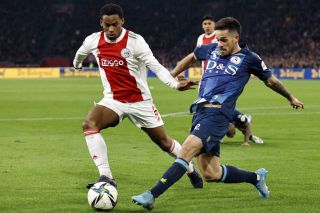 According to Calciomercato, the 20-year-old Ajax and Netherlands defender will be a man in demand this summer, with the Red Devils set to compete with the Bavarian giants over his signature.

Timber started his playing career in Feyenoord’s academy before making the switch to Ajax in 2014. That is where he came through the ranks before finally making his senior debut in March 2020, under Erik ten Hag, at the age of 18.

Since then, Timber has become a regular in Ten Hag’s side, making 69 senior appearances.

It wouldn’t surprise us if Ten Hag tried to bring one or two players that he has worked with Ajax with him to Old Trafford, in order to have squad members who already know about his demands as a football coach.

With United needing defensive recruitments, especially in midfield, it makes sense that Timber is a player Ten Hag would like to sign later this summer.

The Ajax manager is set to be announced as United’s new manager next week.

Let us know in the comments section if you think United should be looking at other Ajax players. Their right winger Antony could be a very screwed signing.