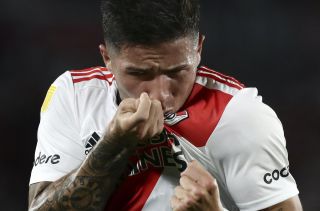 Manchester United could compete with Real Madrid for the potential summer signing of River Plate starlet Enzo Fernandes, according to an Argentine journalist.

The Red Devils want to sign a midfielder in the summer and we’ve already been linked with moves for Declan Rice, Kalvin Phillips and Ryan Gravenberch.

The 21-year-old’s release clause is €20m but it could soon rise by an additional €5m.

There’s also rumours that United will be watching Fernandez play tonight against Fortaleza in the group stage of the Libertadores, as per TYC Sports, who claim the Red Devils’ interest is serious.

TYC Sports say United have already had the youngster scouted on three separate occasions, with a fourth scouting trip planned in the coming hours. They also report that United have ‘planned to present’ an offer to Fernandez in June.

Only time will tell, but it’s intriguing to hear that this will be the fourth time scouts have watched Fernandez this season.