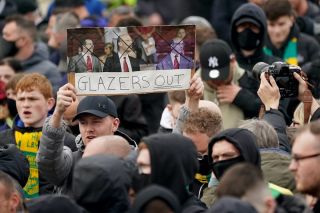 For 17-years, the Glazers have used Manchester United as their own commercial cow and are making sure they milk every last drop.

Another protest has been planned before our clash with Norwich City this weekend – backed by a fan group called ‘The 1958’.

The 1958 group posted details on social media, with supporters due to meet at the Tollgate hostelry in Stretford at 11am before marching to Old Trafford at 2pm. Those involved asked not to attend the game until 3.17pm – a minute for each year the Glazers have been proprietors.

Share, retweet, let’s get the message to all Reds! 🇾🇪 pic.twitter.com/ZaYEMpjlFr

The only worry I have with this is none of us really know who The 1958 are!

They will need some backing from other supporters’ groups like MUST and TRA, but a big issue with United’s fanbase is, so many of them hate each other.

United We Stand editor Andy Mitten said it on a recent podcast and I couldn’t agree more.

“Big issue with Utd’s fanbase, so many of them hate each other. The fanbase is thousands of groups of mates who have their own consensus on things and all think they’re right”

The 1958 have issued another statement stating that their heads won’t be turned by Ten Hag’s appointment.

A new manager won't suppress us. Red White & Black till we get our club back. Relentless

📍Tollgate from 11am, we march from 2pm

“A new manager won’t suppress us. Red White and Black till we get our club back.”

Will this cause the same controversy as the protest held a year ago? Only time will tell but we’ve always been vocal about wanting the Glazers out of our club.