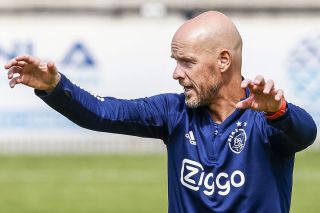 Manchester United are edging closer to announcing their permanent successor to Ole Gunnar Solskjaer, who was sacked in November last year following a disastrous start to the season.

Ralf Rangnick assumed responsibility on an interim basis and the German coach will step down from his job at the end of this season to take up a consultancy role instead. The full extent of that position has yet to be revealed but it’s believed he will work with the next manager.

Earlier this week, it was reported that a verbal agreement in principle had been reached with Erik ten Hag to become the next manager, with an announcement possibly coming next week.

Now, journalist and transfer specialist Fabrizio Romano has offered an update on the situation, insisting that United are working on the 52-year-old’s contract this week, as seen below.

Manchester United are working to prepare contracts & paperworks this week in order to announce Erik ten Hag appointment as soon as possible. Sources close to the manager consider it as matter of time. 🔴🤝 #MUFC

Furthermore, the Italian reporter added that the announcement of Ten Hag’s arrival is just ‘a matter of time’, with details of his coaching staff and agreement with Ajax needed to seal the deal.

SN’s verdict…
United fans will be eager to have the news announced as soon as possible and to not have it watered down by continued insufficient performances by the current crop of players.

Although a top-four finish may be out of reach, a positive end to the season is still positive and an official statement of Ten Hag’s arrival could boost spirits and inspire some players to impress the incoming coach.

Ajax face PSV in the KNVB Cup final on Sunday and an announcement is not likely before then but if contract details are ironed out by that time, an official communication could come shortly after.