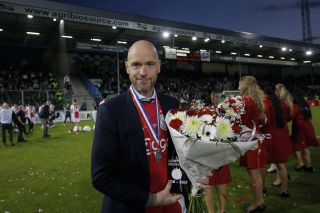 It’s the hope that kills you. Something Manchester United fans are feeling keenly right now.

Arsenal having a rotten week created a crack of daylight for United’s Champions League ambitions. However, true to the form of an expensive clown car, United produced tragic high farce in a miserable defeat to a wretched Everton.

Once Anthony Gordon’s shot deflected off a desperately unlucky Harry Maguire to put Everton in front, United never looked like ever getting back into the game. The players listlessly knocking the ball around before handing it back to the opposition in the final third. David de Gea, referred to the performance as “a disgrace” and, for the first time there was visible irritation in Ralf Rangnick. Finally, it seems, the German now feels the same sense of boredom and annoyance as his predecessors and the fans.

If rumours are to be believed and Erik Ten Hag is to take over as permanent Manchester United manager this summer, then the handover report he’ll receive from Rangnick will likely be six words:

“Rip it up and start again.”

This engorged prostate of a team continues to plumb new depths of contempt for its own fans. Contriving to lose to a club even more mismanaged than themselves and, described by Sean Dyche and his ginger disc beard as a team that “don’t know how to win,” really sums up where Manchester United are. A group of players with no professional pride, going through the motions every week.

Anybody who thinks Ten Hag, Mauricio Pochettino or even Sir Alex Ferguson of 25 years ago could possibly get this squad to carry a tune within 12 months has deserted their sanity.

Ten Hag will likely need five years and possibly the sorcery of Gandalf the White to make United a serious, competitive outfit.

Realistically, eight of the starting XI from Saturday are not good enough to be regular starters in a team aspiring to be competing amongst the top echelon of clubs. The new man will need to time to methodically replace a good portion of the first team squad, a process that will take several seasons but is entirely necessary to implement a coherent playing philosophy.

The club must back the manager in this process. Next year will almost certainly be a write off, as there will not be enough time for the more than two signings signed off by the new guy and several players will be leaving and more yet probably need to leave, lest they continue to poison the dressing room.

Cristiano Ronaldo, Bruno Fernandes, and Harry Maguire all pose the most pressing and varying problems for the future manager.

The disruption and maiming of team Ronaldo demand to fluff his numbers, outweighs his goal contribution. Seeing off four managers in his last four seasons, across two clubs, along with the willingness of a slumping Juventus to let him go, is evidence of that.

Fernandes is a wonderful footballer to watch at his best and for two years proved to be the ultimate firefighter for the tactically illiterate Ole Gunnar Solksjaer. There is a nagging feeling though, that he is not a truly elite footballer. A roaming playmaker, only able to function when the whole team is geared towards serving him. When required to fit his game into a more disciplined collective, all his positives disappear and what you’re left with, is a wasteful whiner.

As for Maguire, this season has been possibly one of the worst for a marquee player at a big club since Fernando Torres’ painful flop at Chelsea. United will not desert the wasteful investment in him yet, but it’s also difficult to grasp how he fights through all the ridicule and errors to become something, at 29-years-old, he simply isn’t, a World Class defender.

This will also mean United making sure a strong setup is in place to work with the next manager and the managers that come after, with a sensible recruitment policy being the bare minimum. Recruit players he can work with and effectively mould over several seasons, the likes of Darwin Nunez, Ryan Gravanberch and Fabian Ruiz provide a combination of promise and instant readiness with scope for recouping value later.

Dovetailed with this is cementing a better pipeline to the reserves and players on loan to see who can contribute something right now. Brandon Williams could yet be an option at left-back, and James Garner has been excellent at Nottingham Forest this season.

The boom and bust days of making extravagant signings with little thought must end. Forget Harry Kane, Erling Haaland and Declan Rice, all would be agonisingly protracted sagas and so expensive as to limit the ability to strengthen in other areas. The last thing a club starting again need is an expensive, unhappy, and disruptive weight dragging down squad development.

Nevertheless, the main resource this all needs, is time.

The question is: Are Manchester United truly committed to offer that precious resource and start again?

2 responses to “Opinion: Erik ten Hag may have to take up alchemy to salvage this sorry Manchester United outfit”