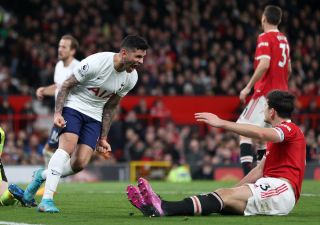 It’s crazy to think Tottenham Hotspur have leapfrogged Manchester United in the race for top four, despite losing 3-2 at Old Trafford last month.

Antonio Conte, who missed out on the United job in November, thought his team had done enough to share the points when they made it 2-2.

However, United had the last laugh when Cristiano Ronaldo scored a hat-trick to make it 3-2.

There was some controversy following Tottenham’s second goal, though.

Argentina international Cristian Romero was spotted shouting in Harry Maguire’s face after the United skipper put the ball into his own net.

Romero’s actions were rightly criticised by fans and pundits alike.

In a recent interview with The Athletic, Romero explained: “I think sometimes things happen in football and maybe if you capture a moment with a single photo it can seem like something that wasn’t really happening.

“I’ve got nothing but respect for Harry Maguire. He’s a top player who is having a great career.

“And generally I always respect my opponents so I think people who don’t know about the game get hold of a story and run with it and talk about something that’s not really there.

“Maybe on that occasion, I didn’t quite do the right thing but I had no bad intentions.”

It seems like a strange way to treat someone you have nothing but respect for, right?

Romero was kicking a man while he was down – knowing that Maguire has had to deal with a lot of criticism this season. I can’t understand how he thought yelling in his face was a good way to show respect for an opponent?

Hopefully we have more to shout about when Tottenham come to Old Trafford next season.