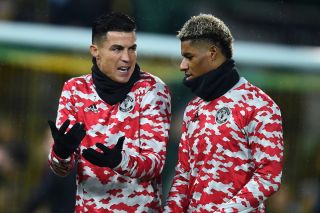 This one may fit right into the unpopular category at first, but when you really think about it, and how long Ronaldo has left at United, Merson has a point – apart from saying the league is too good for him given the amount of goals he’s scored this season.

Portuguese superstar Ronaldo is United’s top scorer this season, but it has been an underwhelming campaign for the club, especially Rashford.

Rashford has just four Premier League goals this term and has been dropped by Ralf Rangnick on a number of occasions. He was dropped

Players have bad seasons for a number of reasons. When I watched Rashford play this season, it’s clear to me that he is lacking in confidence. Is he a player I’d cash in on the summer? No way.

Ronaldo, on the other hand, is coming to the end of his career. As much as I’d like him to be at Old Trafford next season, I wouldn’t lose sleep if he left on the back of failing to qualify for the Champions League.

Writing in his Sky Sports column, Merson said: “Cristiano Ronaldo is now 37. What’s happening at United will be driving him up the wall. He’s been one of the greatest players of all time but he can’t now do what he used to.

“This league is relentless, it’s too hard. I’m not going to say, ‘I told you so’, but I could see this happening.

“He got [Ole Gunnar] Solskjaer the sack, simple as that. They beat the record for the longest run of away games without a defeat and they played a certain way.

“Rangnick brought off Marcus Rashford at Everton when he was United’s best player because he didn’t want a repeat of what happened earlier in the season at Brentford.

“I was at that game and it was embarrassing. He shouldn’t have to justify his decision as he’s the manager. At Ronaldo’s age, you can’t play every game. United need Rashford more than they need Ronaldo going forward.

“The other week, they had Edinson Cavani alongside Ronaldo up front. It needs to stop sooner rather than later, otherwise this club is just going to fizzle out from being the biggest in the world. They won’t be for much longer at this rate.”

Hopefully the new manager can change things for the better at Old Trafford but I fear it will take more than that at this club.