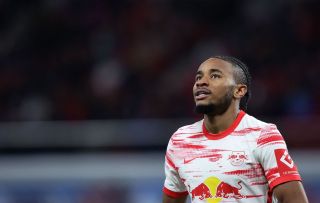 This year’s summer transfer market is fast approaching and from a Manchester United perspective, it’s going to be a busy one. A big clearout of the current squad is expected and when there are departures, incomings usually follow.

A new manager isn’t in place yet but Ajax coach Erik ten Hag is expected to take the reigns at Old Trafford, with recent reports claiming that the Dutchman is close to making a final decision on his future.

A move for Benfica striker Darwin Nunez has already been talked up amid question marks over some of the United forwards, including Cristiano Ronaldo and Anthony Martial.

And although a forward may be high on United’s list of priorities this season, there is a glaringly obvious issue in midfield and Ten Hag will be desperate to make a change in the middle of the park.

RB Leipzig star Christopher Nkunku, 24, is one of the hottest properties in Europe after taking the Bundesliga by storm this season and has been rumoured to be the subject of interest from United.

That’s according to German football expert and journalist Florian Plettenberg, who claims that the former Paris Saint-Germain midfielder is on United’s list this summer. Rangnick is said to be an admirer of the 24-year-old, with internal talks over the player already believed to have been held.

Furthermore, United are said to be considering a transfer but as things stand, there are too many players in United’s bloated squad. A move wouldn’t be cheap either, with the statistical website Transfermarkt valuing the star at €65m.

SN’s verdict on United’s potential interest in Nkunku…
If you’ve been watching the Bundesliga this season, you’ll know that Nkunku is one of the best players in the division. He has also been in sparkling form in the Champions League, which included a hat-trick against Manchester City earlier this season.

In 48 appearances, Nkunku has amassed a whopping 28 goals and 18 assists in all competitions this season – Bruno Fernandes like numbers.

United would do well to fend off interest from Europe’s elite clubs to bring Nkunku to Old Trafford but as Plettenberg states, any move could hinge on departures.